Everybody who is any body remembers the board game of Monopoly, which is why it’s one of the most loved and most played board games throughout the whole of the world. What other game, apart from Monopoly brings back so many warm memories of the past when families sat around at night time playing board games.

The Monopoly board game is a game of luck, chance and wheeler dealing. The aim of the game is to buy and sell properties, build houses & hotels and collect your due rents. Work your way through the game by building up your portfolio of properties and level of wealth with the overall aim of bankrupting your opponents or achieving the highest level of wealth in a given period of time.

A History Of Monopoly & It’s Origins 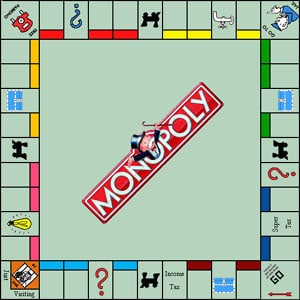 Monopoly is now the best selling board game in the world and has actually outsold all of it’s rivals and most other board games of it’s kind. The game has been distributed to over 103 countries and has been re-produced into 37 languages.

The game was originally presented to the Parker Brothers back in 1934 and was immediately rejected due to 52 design errors pointed out by the company. As a result Charles B. Darrow (the inventor of Monopoly) went away and began creating the Monopoly board game by hand. He actually ended up making and selling 5,000 copies of the game through a department store in Philadelphia. It was at this point that Mr Darrow realised that the demand for the game was definitely there, so he returned to the Parker brothers once more and they agreed to put the game into production.

There have been a huge number of Monopoly board games created and released to the market, even the special editions alone run into the 30’s. The following is a current list of all Monopoly versions, including special editions. The game is also available in various different formats including: