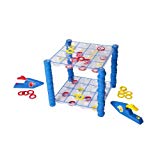 The Connect 4 board game was originally published back in 1974 by the Milton and Bradley company and since then it’s seen many variations and editions released out onto the marketplace. The game is designed for youngsters around 7 years and up and the overall playing time is usually around 10-20 minutes. The game requires a little bit of fore thinking strategy to play well in that you have to anticipate your opponents next move in order to get one step ahead.

to play but in part takes some of the strategy away from the game since the place in which the peices land is based entirely on luck, and maybe a little judgement. The only real change from the original game is that now you fire the red and yellow discs into the slots rather than posting them in by hand. Something which requires a little more skill and aim.

The game requires the player to be aged 5 years or over and can be played by two people at any one time.

The game is a nice twist on the classic Connect 4 board game but for me it takes part of the original concept of the game away. But then for kids living in today’s society how interesting can posting discs into slots really be!?