Play a board game as a family is a great way of the family spending quality time together and interacting with each other, something which is often neglected in today’s fast paced society. So in this article we are going to try and help you highlight the kids board games which are most enjoyable for both the kids and the adults alike, and are perfect for the whole family.

There are hundreds, if no thousands, of kids board games on the market today and many of them aren’t worth your time because some are either not good enough or are aimed just at kids alone and would be no good for the family. The following board games for kids are our choices when it comes to selecting kids games for the whole family.

Snakes and Ladders – The Snakes and Ladders board game is a pretty classic game that’s been around for a long time now and is usually played by two or more people. This game is played on a colored board which has numbered squares on, each of these squares will link to another square via a Snake or a ladder, hence the name of the game “Snakes & Ladders”. The dice is rolled by each player in turns and each player moves their counter around the board going up the ladders and back down the snakes. The idea of the game is that you try to reach the end of the board as quickly as possible, whilst being slowed down by the snakes. This game may not be the most appealing for the much older generation but it’s okay for children and parents, it’s also very good to use to improve counting and mathematical skills.

Connect Four – Connect Four is another classic children’s board game, although it doesn’t really have a board as such, not a horizontal one anyway. This 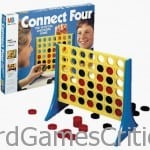 game has also been known as Four In A Row and is a fast paced game which develops concentration and reasoning skills as well as being fun for the whole family. The game is for 2 players and the aim of it is to be the first player to place four of the same colored counter in a horizontal, vertical or diagonal row, it’s a little like noughts and crosses. 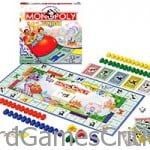 Monopoly Junior Edition – The Monopoly board game is a technical game which would ordinarily be quite complex for younger children but the junior edition has made it possible for kids to play as well, meaning the whole family can get involved in this one. This junior version of this family board game comes with simpler to follow rules and fewer properties to handle and manage. It’s a great game for teaching strategy, counting and reasoning skills and a good place to get them started ready for the adult version of Monopoly.

Sorry Board Game – The Sorry board game is a simple but fun board game which even I remember playing as a child. Each player of the game has four pieces/pawns which they have to move around the board based upon the selection of cards from the deck. The player to win will be the first one who gets all four of their pieces onto the home space. This is a very basic board game, but again it’s one which has benefits for counting and mathematics.

Zingo Board Game – The Zingo game isn’t really complex at all, it’s a simple and straightforward board game and one which may people may consider boring, that’s why it’s at the very bottom of this list. Zingo is basically the same as Bingo, the main difference being that players cross pictures from their picture cards as they are drawn from the machine, instead of numbers. The first person to match all pictures on their card will win. It’s a very simple game but it’s simplicity does make it suitable for the very young children and develops upon association skills.

There are many other board games which may be suitable for the whole family, including kids, which have not been included here. Just a few include the Taboo board game, Balderdash board game and the Settlers of Catan board game. Although keep in mind that Settlers is designed more for older children due to it’s complexity.

Where Can You Play Scrabble Online FREE, No Downloads
May 22, 2011

Where To Play Plants Vs Zombies Online Free, No Downloads
August 2, 2011