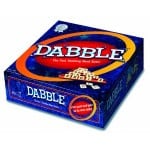 Overall – The Dabble Board Game Received A Total Rating Of 5 Out Of 5 – Based On 3 Reviews.

The Dabble board game is a fun and funky Word/Educational board game bought to you by Brooklyn based inventor George Weiss.

DABBLE provides fun for the entire family. Not only does it provide a challenge for the savvy speller, but it is the ultimate way to make learning fun for younger children.

At the core of the game lies a fast paced word game that will help children develop many useful skills including vocabulary, spelling and the ability to think quickly under pressure.

This is an exciting and challenging family game that provides hours of fun for two to four players.

The rules of the game are simple. Each player selects 20 lettered tiles and must be the first person to spell 5 different words (a 2 letter, 3 letter, 4 letter, 5 letter and 6 letter word) within a five minute time frame.

To make the game a little easier for new spellers, simply remove or extend the timer or omit the 5 and 6 letter word requirement.

This game has a hint of Scrabble about it but there are a couple of nice things about this game over the Scrabble board game. Dabble gives a time limit per turn of only 5 minutes to come up with a long word, this means that unlike Scrabble (when the timer isn’t used)the game doesn’t drag on. In addition to that there is no point scoring, what this means is that the game is much quicker to play and for that reason is a little more fun.