Overall – The Chaotic Connections Board Game Received A Total Rating Of 5 Out Of 5 – Based On 1 Reviews. 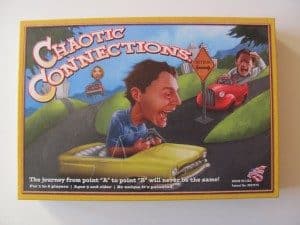 About The Game Play

Chaotic Connections is a well made, quality board game which comes complete with the following:

The game is designed to be played by 2-6 players aged 9 or above, it’s recommend by the game creators that you have at least 4 to get the best out of the game. We’ve played the game with both 2 and 5 players and we can honestly say that playing the game with more people is far better and makes the game more challenging and interesting.

Once the game board has been set up with the City Cards, Chaos Cards, Road Closed Signs, Detour Signs and Traffic Signals it’s time to begin.

The game begins with each player selecting a color to play on the board and they take 6 City Markers pertaining to that color. Next, players receive a total of 5 City Cards of which they will keep 3 and pass 1 of the remaining 2 cards to the player on their right hand side. The City Cards display the name of 1 of 36 US cities, the player must place each of their City Markers onto the matching locations on the board as dictated by their City Cards, the overall aim of the game being to be the first person to join all of their cities through their own “Chaotic Connections”, built through the use of their own matching color Road Tiles.

Your movement on the board is dictated on each turn with the draw of a Chaos Card instead of the usual dice found with most family board games. The Chaos Cards may allow you to lay down your Road Tiles and make those all important connections, hinder the progress of your opponents or even hinder your own progress. With around 13 possible Chaos Card variations the way the game goes is really anyone’s guess. Your aim is to move forward and progress quickly, but watch out for unscrupulous players, detours, stop signs, intersections and road closures along the way.

The Look And Feel 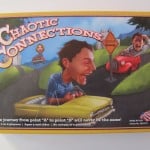 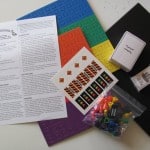 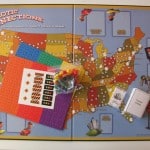 Overall Chaotic Connections is a fun and light hearted family board game which is perfect for any occasion, especially around the holiday times such as Christmas and Easter.

The game comes in a durable and colorful outer box which is both pleasing to the eye and protects the game from being damaged during travel if you’re planning on taking it away with you on your next family getaway.

The board game board is larger than you would find with most family board games of this type and in this case that’s a huge positive, since the game is recommended for up to 6 players we found it was nice to have the room for all players to fit comfortably around the board.

Chaotic Connections is quick and easy to set up and even if you’ve never played the game before it will take you just a few minutes to get started, owing to the very simple and easy to follow instructions provided with the game. These instructions are laid out in a logical and step by step format on one double sided sheet of paper, providing just the right amount of detail to play the game almost immediately after opening the box.

The overall game play is simple yet fun and whilst a good majority is based on chance the game still requires some simple strategic forward thinking to give you the best chance of beating your opponents. If you’ve got children over 9 playing there is also the educational value of being able to learn many of the major cities in the US.

From a time perspective the game took us just over an hour to complete with 5 players but that was during our first time of playing the game. We would recommend usually allowing 40 minutes to play this game with 4 players and 60 minutes with 6 players.

Chaotic Connections is a solid and fun family board game which we highly recommend for those family game nights around the kitchen table or to take with you on those family vacations.

The overall quality of the game and it’s packaging is excellent, the retail price point is good and the game play is simple to follow & fun for all the family.

We see some great potential for future variations of the game in different countries around the world such as the UK, Australia and Canada.